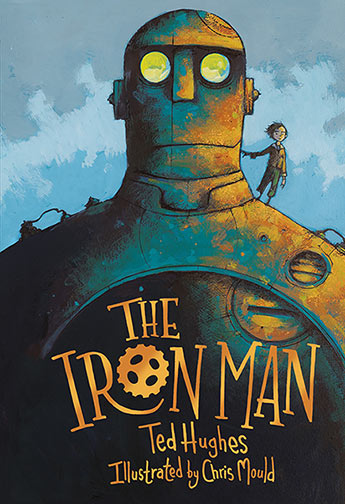 Taller than a house, the Iron Man stood at the top of the cliff, on the very brink, in the darkness. The wind sang through his iron fingers. His great iron head, shaped like a dustbin but as big as a bedroom, slowly turned to the right, slowly turned to the left. His iron ears turned, this way, that way. He was hearing the sea. His eyes, like headlamps, glowed white, then red, then infra-red, searching the sea. Never before had the Iron Man seen the sea.

This is a newly released version of Ted Hughes’ classic tale, illustrated by Chris Mould.

But one little boy realises that the Iron Man is not here to destroy the Earth. He could even save the planet from a new, more deadly danger.

The Iron Giant by Brad Bird is a 1999 American animated film, based on the 1968 novel The Iron Man by Ted Hughes.

Pistes / Activities to participate in the festival:

Record a radio news report (3 minutes maximum) about the space-bat-angel-dragon’s landing in Australia (cf. chapter Four “The Space-Being and the Iron Man”). The best records will be broadcast during the Children’s Book Festival.

Rewrite the first chapter “The Coming of the Iron Man” from the Iron Man’s point of view. The best narratives will be displayed during the Children’s Book Festival.