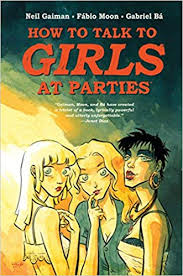 "Come on," said Vic. "It'll be great."
"No, it won't," I said, although I'd lost this fight hours ago, and I knew it.
"It'll be brilliant," said Vic, for the hundredth time. "Girls! Girls! Girls!" He grinned with white teeth.
We both attended an all-boys' school in south London. While it would be a lie to say that we had no experience with girls -- Vic seemed to have had many girlfriends, while I had kissed three of my sister's friends -- it would, I think, be perfectly true to say that we both chiefly spoke to, interacted with, and only truly understood, other boys. Well, I did, anyway. It's hard to speak for someone else, and I've not seen Vic for thirty years. I'm not sure that I would know what to say to him now if I did.
(extract from the short story)

"How to Talk to Girls at Parties" is a science fiction short story written in 2006 by Neil Gaiman [and adapted as a graphic novel by the author and illustrated by and Gabriel Ba and Fabio Moon as illustrators.]
It is about a couple of British 1970s teen-aged boys, Enn and Vic, who go to a party to meet girls, only to find that the girls are very different from the boys' expectations.
The story follows Enn, a shy boy whom the more confident Vic encourages to just talk to girls. While at the party, Enn talks to three very nice but strange girls. As he focuses on "making a move" on the girls, it is revealed to the reader that the exchange students there are more interplanetary than foreign.

Pistes/ Activities to participate in the festival :

1 - Enn meets another girl at the party. Imagine the girl, their encounter and write it or draw it as a couple of pages in a graphic novel.

2 - Everybody knows that Aliens came on planet Earth. Enn is interviewed by a journalist. He relates his experience. Get ready and act the dialogue.

3- Film a 5 to 6 minute Duo Interpretation (or Duo interp)  of How to talk to girls at parties and send it to the Children’s book festival in Cherbourg. A duo interp is  a short performance in which the 2 performers act out a literary piece under certain restraints : no eye contact, no touching your partner and no props. The performers can cut anything out of their piece but cannot add any dialogue.
https://en.wikipedia.org/wiki/Duo_Interpretation
or watch examples on youtube or on this link :https://lfib.ac.th/en/lfib-life/la-vie-du-secondaire/ressources-pour-la-classe/english-lecteur/3496-workshop-2nde